Just as I think I'm going to have time to blog things suddenly get hectic in my life again.With things calming down again I'm back to trying to kick this blog off. I've decided not to write up on the breaks I've had in the past, as I will continue to lag behind.

In those breaks I did however pull my first hit. This Torry Holt jersey card from Gridion gear 09, numbered 126/250 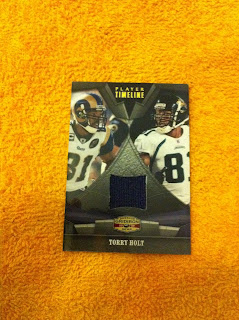 I've also started to branch out into buying single cards from ebay. This first lot were a bit of an impulse purchase, but were dirt cheap.
Jonathan Dwyer and Brandon LaFell, both from press pass 2010, and both # /100. Also a Harry Douglass jersey out of 2009 Upper Deck, unnumbered. 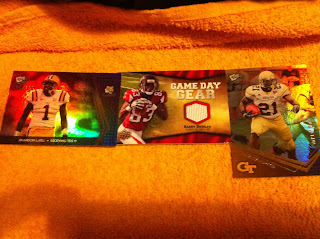 I apologise for the quality of the photos. I will hopefully be getting a scanner soon so won't have to deal with the hassle of trying to use an Iphone at night.
Posted by Mark at 12:53