In an earlier post I mentioned that I had been informed that I had won a twitter contest from panini. The card arrived the other day,. It marked a couple of firsts for me as a collector, my first basketball card and my first autograph. 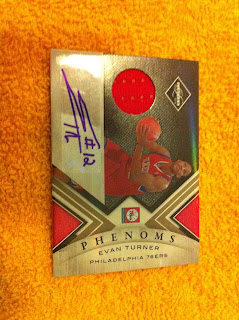 Evan Turner Phenoms jersey autograph from Limited 10-11
I could not be happier with the card.It's a great looking card that I got just for following Panini on twitter. Panini were very quick at contacting me, which considering it was christmas eve I was really impressed with. I was also impressed by the fact that there didn't seem to be any issue with sending to the UK. This surprised me considering how difficult it is to get packs or boxes over here I didn't expect Panini to be prepared to send the card abroad. So kudos to Panini for the great competition and card.
Posted by Mark at 13:16