eBay on the cheap

These are some cards I found for around $1 on eBay. I really wanted the Marshall Faulk patch, and the seller did really good shipping, so I thought I might as well pick up some of their other lots at a really cheap price. 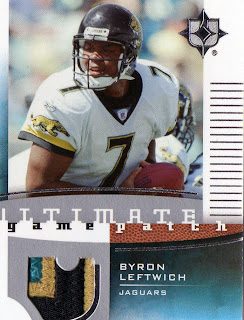 Byron Leftwich, Patch from 2007 Ultimate Collection, 67/99
I have a bit of a soft spot for Byron Leftwich, he's always been a solid backup when the Steelers have needed him, and this is just a great looking four colour patch (almost five, there's a tiny bit of white in the right hand corner) 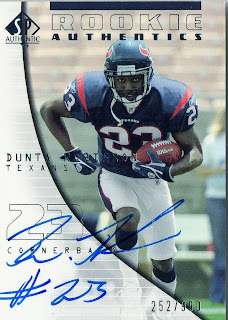 Dunta Robinson, Rookie Auto from 2004 SP Authentic, 252/990
Still one of the highest paid CB's in the league. His absence in the Texan's secondary has been obvious this season. A very nice on card auto of a NFL starter. 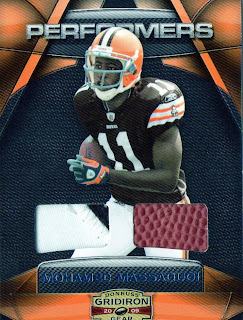 Mohamed Massaquoi, Patch and ball from 2009 Gridiron gear 47/50
Massaquoi has become a starter in the Browns offense, and despite having a couple of unspectacular seasons is still expected to become a solid starter in the league. 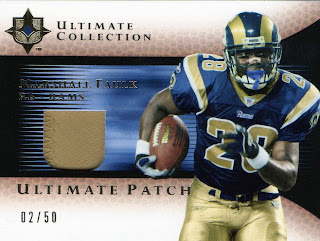 Marshall Faulk, Patch from 2005 Ultimate Collection 02/50
And the card that started it all off. I couldn't resist a low numbered patch card from a future hall of famer.
Over all I'm happy with the cards and what I paid for them. I do think in future I need to be slightly more focussed in my collecting, but for now am happy picking up nice cards at even better prices.
Posted by Mark at 04:11