I'm going to round up the packs I busted at the end of last week in one post, otherwise I can see myself getting behind with the blog again. All of these are hobby packs bought through ebay. I've also decided to start rating the packs, at the moment I'm buying packs of a lot of different sets to get a feel for which sets I want to collect, so I'm going to be making very snap judgements on just one pack.

I'd never heard of this product before, and I love cards with legendary players on them, so this product seemed perfect for me. I really like clean classy design of the cards, very fitting with the theme of the set and not to in your face (looking at you panini). The checklist looks really solid and for the price I paid this may be a set I try and complete.
Verdict
Nice base design and good checklist.
3/5 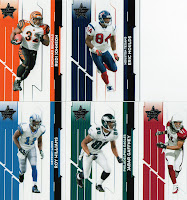 I'm not too sure why I bought this pack as I wasn't too impressed with 09 version, and the 06 outing did nothing to change my mind. I'm not a huge fan of the players being put against a background instead of using the full shot, and the background here is just a bit too busy for me. I also pulled another Rudi Johnson who haunts me.
Verdict
Not a fan of the base design. I can only see 2 stars in this pack and no rookies, so it doesn't really live up to it's name.
1/5

I really like the design of these cards, the chrome affect makes what I thought was a poor design on the normal Topps chrome set look really great here. Not a massive Favre fan, but it would have improved the insert card if the photo was a shot of the TD pass, not favre stepping back.

Verdict
I love the way the Chrome effect is used to enhance the design. Nice selection of cards/inserts for a four card pack.   4/5 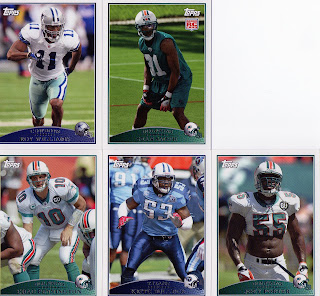 The design is very stripped back and lets the (mostly) top class photography take centre stage. I liked the amount of variety given in a pack with not all base, though I did only get 8 instead of the promised 10 cards which left me a bit miffed. 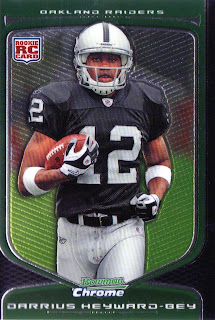 Darrius Heyward-Bey (Rc)
Eddie Royal
DeSean Jackson
Bernard Berrian
The base design is striking, and enhanced by the chrome effect. I like the idea of putting green around the rookies, I would like it even more if I pulled a better rookie. I'm also not to sure why the back talks about their draft and their career.
Verdict
Solid design. Ok pack. The cards are very bowed.
3.5/5
Posted by Mark at 09:48