This just my round-up and opinion on some of the hobby news stories that have broken over the last day or two.

First up as many of you will be aware Topps diamond card give-away has been launched, giving people a chance to collect and trade classic cards from the last 60 years of Topps baseball. The giveaway also gives people a chance to win Topps diamond rings and 1/1 cards that have diamonds embedded in the cards. Within a few hours of the giveaway starting people are already reporting having redeemed one of the diamond embedded cards, the first collector with proof posted this to the blowout cards forum. I personally love the idea of the giveaway, and it adds a level of ease to trading that us overseas collectors aren't used to. 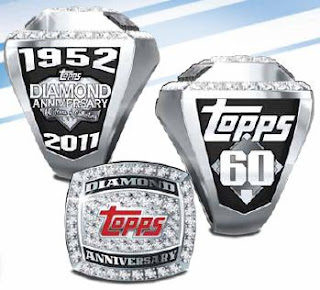 Today Panini announced that collectors will be able to collect real gold cards from this years incarnation of playoff contenders football. The cards will be inserted into packs in the form of redemptions to stop the cards becoming damaged, and one would assume to stop people pack searching the packs for incredibly valuable cards. There are 52 cards that feature veterans as well as rookies. Panini have also released details that there are in fact short printed variations of the rookie on card autogrhs the product is famous for, however information how limited these short prints are hasn't been released to the public. A more accurate description of the gold cards and a box break of playoff contenders can be seen below.
And finally topps has announced today that they will be inputting buybacks for the highly sort after Albert Pujols rookie auto into packs of  2011 Tribute Baseball. There will be 30 buybacks, each of the buybacks will be good for one of the following cards.
It may just be a ploy to get people to buy one of their least popular products, but it has the looks of a ploy that may just work on a lot of collectors.
Posted by Mark at 09:20